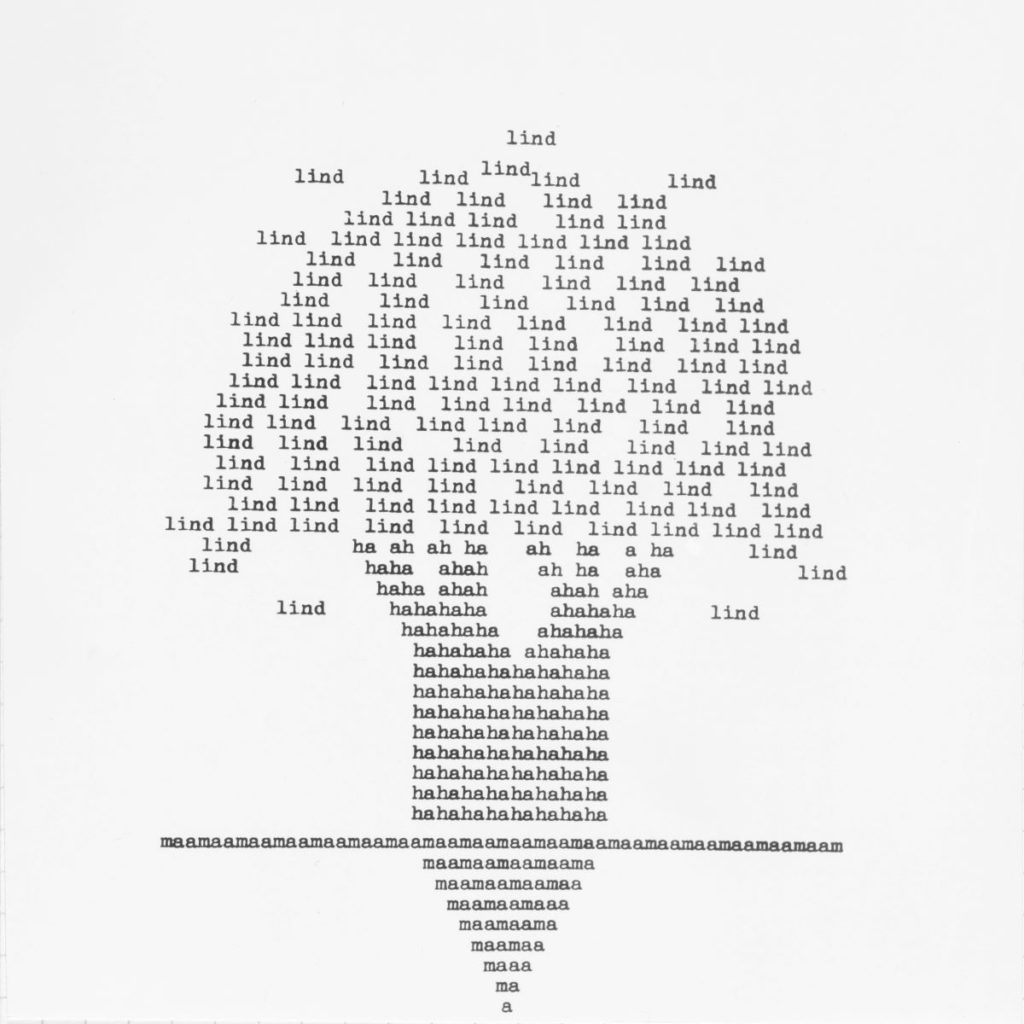 “It happened in November 1967 while I was in the Soviet Army in  Severomorsk and guarding the weapons storage… I was looking at the silent snowfall behind the barred window. I was bored and I missed home. I was thinking about writing, about creating something, but words did not come out of the typewriter. Finally I started to follow one impulse, I used the “o” and “-” to create jumping signs on the paper… like jumping peas on an imaginary drum… At the same time I could notice the different durations and intensities of the sounds that belong to the verbal thinking – to the language that we use for speaking, but which were almost visually living at the same time.”

“I went my own way along the borderlands of literature and fine art, attempting a synthesis. In the area of general concrete poetry I called my poetry by the term – evident poetry. Evidens in Latin: obvious, visible with the naked eye. I began to call the more graphic direction typewritten drawings. Typewritten drawings have a more extensive field of meanings than typewriter drawings: the latter is one type of the first, because not all typewritten drawings are made on a typewriter.” 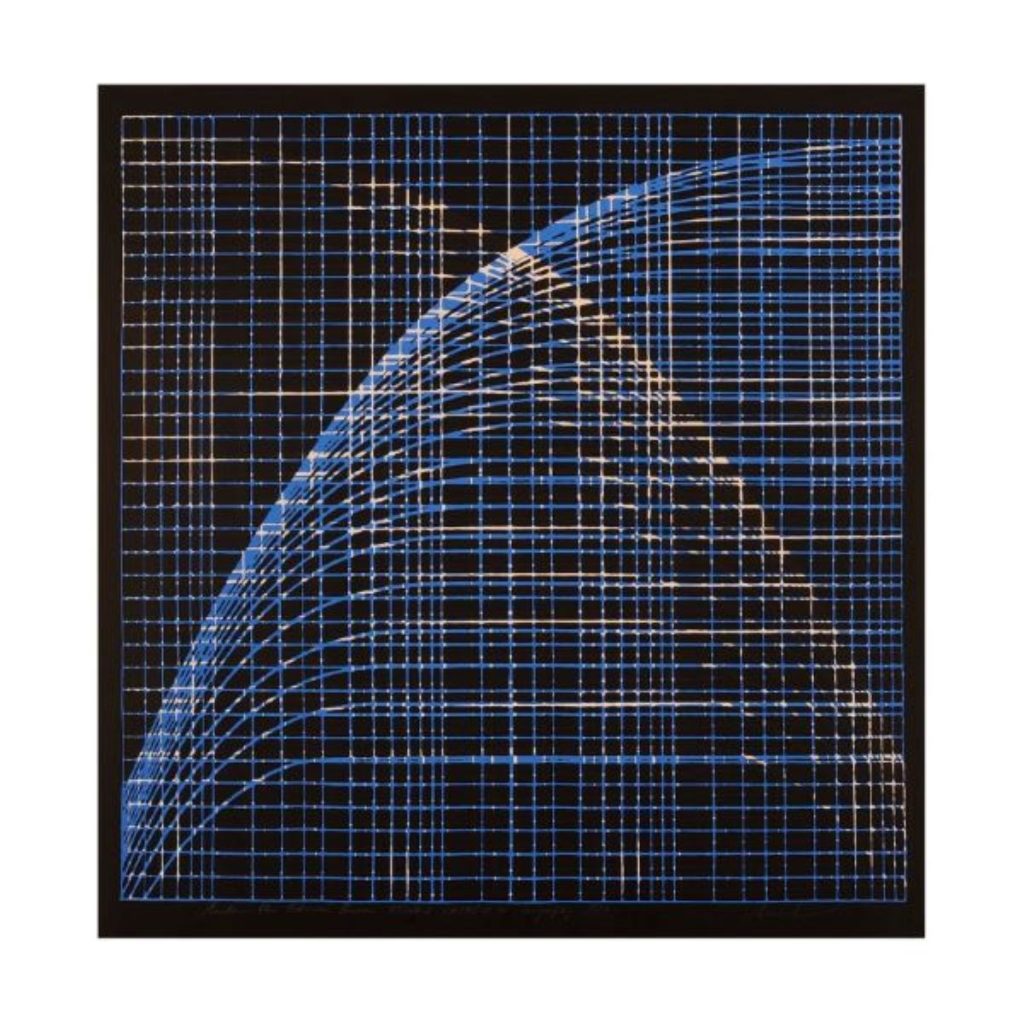 Technical graphs
Under the Sky /Under Estonian Sky I–VIII (also: Under the Heavens), 1973

“This is Raul Meel’s most significant work, and represents a national secret language and an algorithmic approach. The visual foundations of the screen printing were schemes taken from the Manual of Mechanical Engineering I and a Russian- language reference book about protection relays. The screen printings were created by printing three basic images and their reflections, two by two, on top of one another. Before its realisation, the artist noted down the possible compositions as formulas and tried them out in theory. Such an approach is quite singular in Estonian art. Meel wrote down the picture formulas in three versions (minus, standard and plus) in three side-by-side columns, getting a total of 5328 formulas. The standard is 1776 combinations, which multiplied by three gives 5328.

The formula columns fit on 20 pages, which the artist himself regarded as avant-garde drawings. They can also be called instructions. The system of notation used in the formulas was based on the Latin alphabet and Arabic numerals…

The main colours are blue and black, into which the artist used to hide his forbidden Estonia-desire. The furthest right-hand side ensemble, the red The Burning Bush, represents the “other”, an antagonistic element, towards which the energy of blue-black compositions is directed. The formula-based character of the screen printing makes the artwork singular.” 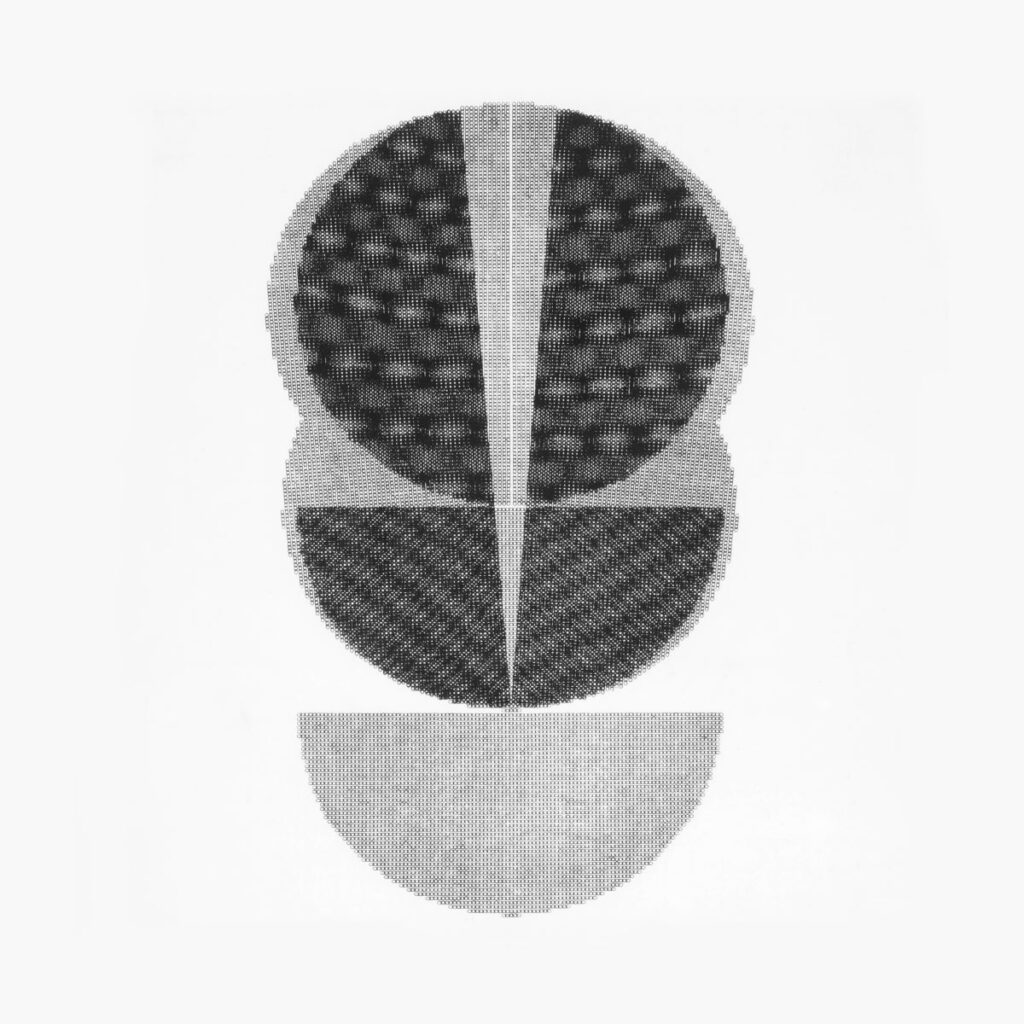 “We can observe the primary modules of typostructures taking shape in Meel’s manuscripts from 1968—1969, in which, by using the letter x, he created rounded abstract forms. The artist then developed an approach that went beyond visual poetry: the letters are no longer connected to words, sentences or their formal features. Meel composed an airy, mesh-like typographical texture, which became the material side of his shapes-modules. Taking his ideas from the world of technology, Meel called his modules typostructures. By means of typostructures, he was able to create a limitless number of series of modular structures; he was able to visualise mutations or forms that emerge when the modules halve or overlap. As in kinetic art, Meel aimed to achieve dynamic results and make his objects move. He explored different positions and shapes that emerge after the objects halve and overlap on paper…
Meel’s typostructures were successful at international exhibitions, where Meel sent his works illegally, but his art was frowned upon in his homeland…. The prints from the series Transformations of Life were shown at the Ljubljana Printmaking Biennial in 1971. In 1972 Meel’s work Rebirth was awarded 4th prize in the open-theme category of the main competition at the Kraków Print Biennial. His works Rebirth, Imprisonment and Fatigue were shown at the curated exhibition of printmaking at the Venice Biennale in 1972.” 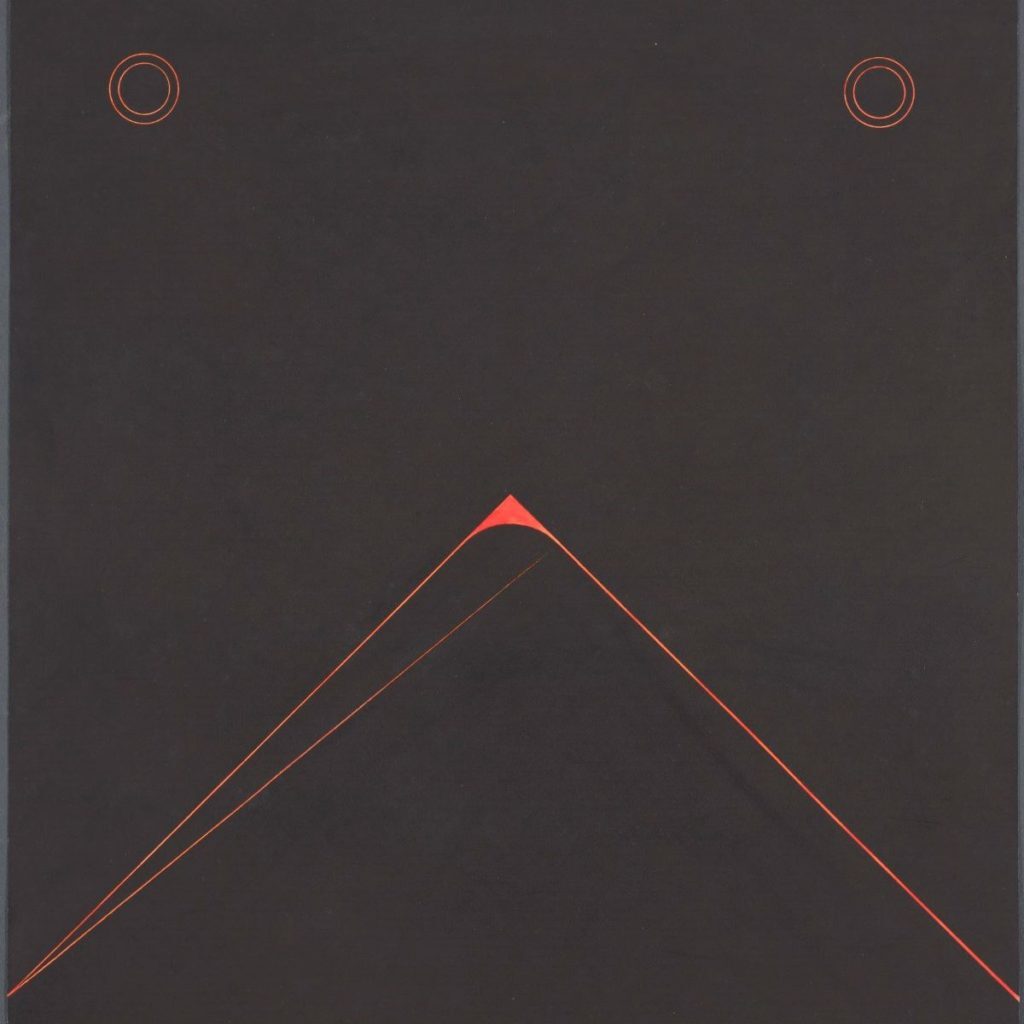 “The patterns of mother’s fabrics and designs of father’s work – they were the art of my childhood. Each farm has numerous items with simple geometrical shape or stereometric form, and people who made them had pondered about the phenomena, creatures and things in one’s own life and the world in general, about their soul, wellbeing, harmony, beauty and dreams…

Geometric art has always been associated with general metaphysical dreamy images, but in our present day – after the death of gods and kings, almost after the end of history – human communities seem to almost fear any cosmic aspirations, and many artists are involved in casuistic political speculations or the physical, bodily worlds of themselves or their partners. The urge to reach the other, intellectual shore of human existence thus often stays out of reach. A well-known critic of our younger generation asked me, clearly confused: “How can one evaluate geometric art? There are no criteria, are there?” I replied that it is possible to exercise one’s sensitivity, experience and knowledge of tradition; with this, our conversation ended… Again I started contemplating about art not having aims based on fixed criteria, objective perceptions of truth.” 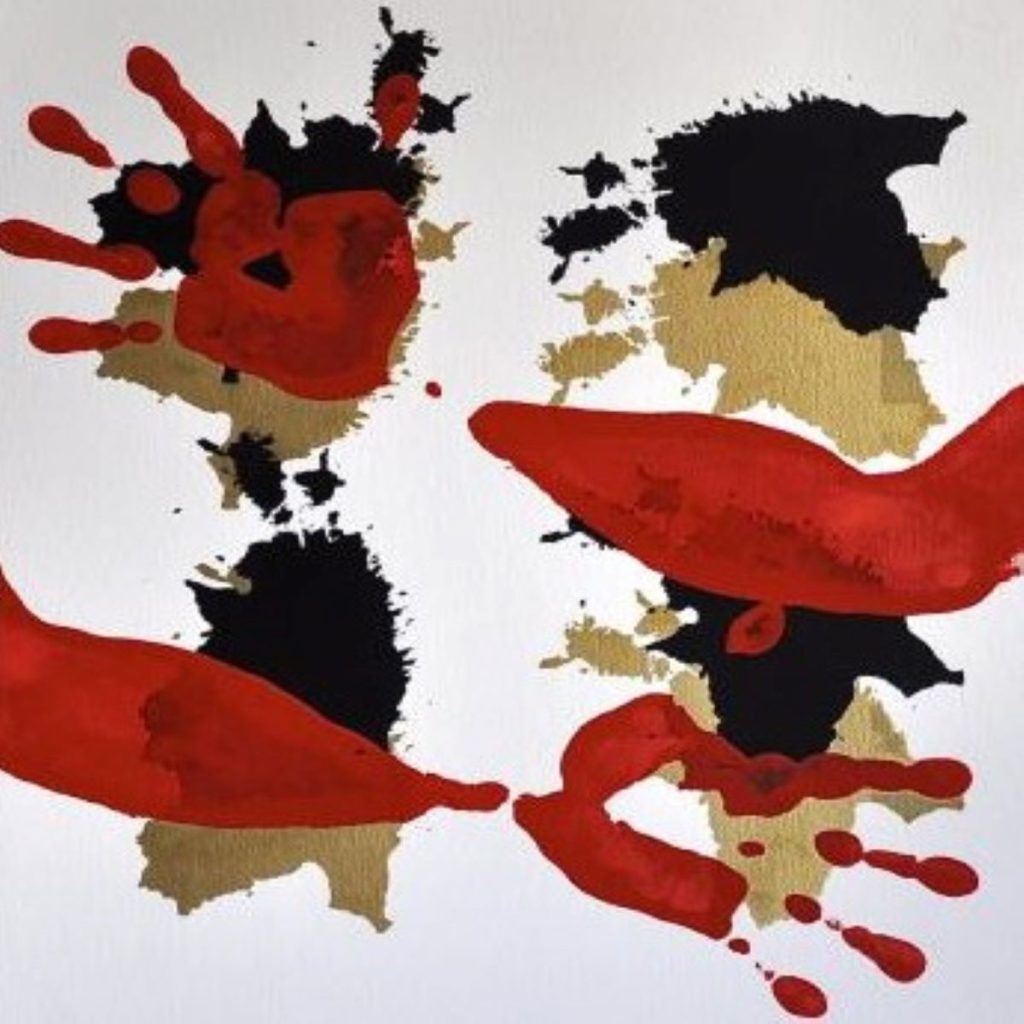 “In spring 1977 I managed to send two prints through Poland to the Ljubljana Print Biennial: “Individually” and “Hegemonically” (76×52 cm, coloured serigraphy, relief print, 1976). There were 1064 works of 428 artists from 57 countries. International art critics valued the works very highly – graphic art was still prestigious…

The cultural magazine Vikerkaar (Rainbow´; the Russian edition Raduga; no 9/1988) published an essay by Sirje Helme, “Raul Meel on Arcadian Road”. The front and back cover presented a picture of my most recent series “Embraces” (about 120 pictures, a 65×50 cm, 1988, serigraphy, body art). On the pictures, arms soaked in blood, familiar or strange, in fact mine, are trying to keep golden images of Estonia from slipping to the ground. These pictures enraged the Russian chauvinists to the point where they demanded the author be lynched. I donated 50 pictures (all originals) to the Estonian Heritage Board.” 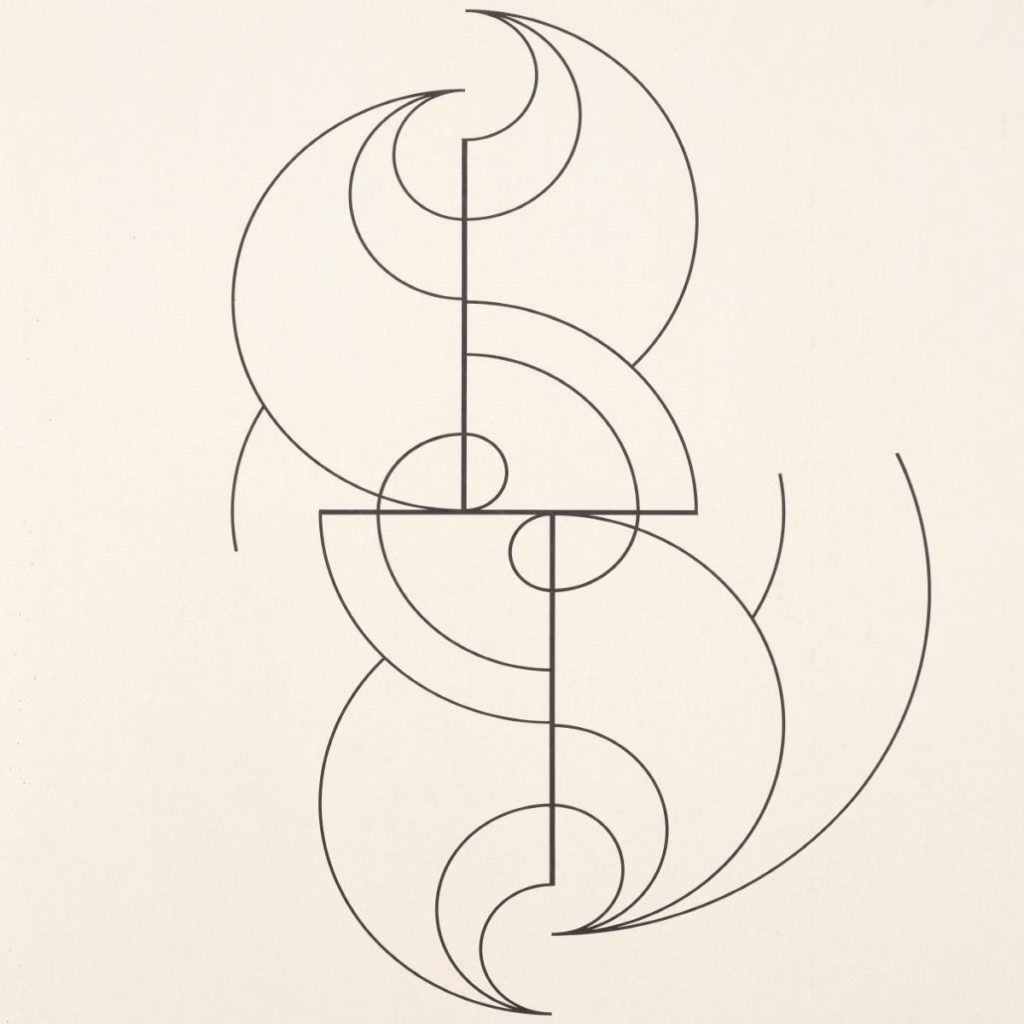 “In 1980 Meel discovered the traditional pen and ink technique and created several important series which impart the message of the importance of combinations of simple elements. The emphatically aesthetic quality of these series relates to the elaborate presentation drawings of new technologies and scientific research.

Meel showed the series I Was in Arcadia, Too at his solo exhibition at the Tallinn Art Hall Gallery (then called the Art Salon) in 1982. The ESSR Art Fund purchased three drawings. The series presents a vision of a process in which an endless number of different images are formed with curved lines of uniform width. According to Meel, the theme of the series is the story of the creation of the world, which he called “the putting together of a new, temporary world”. He avoided the usual word “creation”, and regarded his own wording as a more objective description of geometric art. The 23 drawings in the series I Was in Arcadia, Too are based on the concept of the dynamic line, in which the images curve inwards and imitate different phases of kaleidoscope-like motion.”

He first exhibited the series The Embrace of Curved Lines in 1988, at the show “Structure and Metaphysics” in Finland. As in op art, Meel’s lines are repeated with mathematical precision and by overlapping from sinusoidal patterns.